Is Human Trafficking a Public Health Issue In Africa?

Is Human Trafficking a Public Health Issue In Africa? 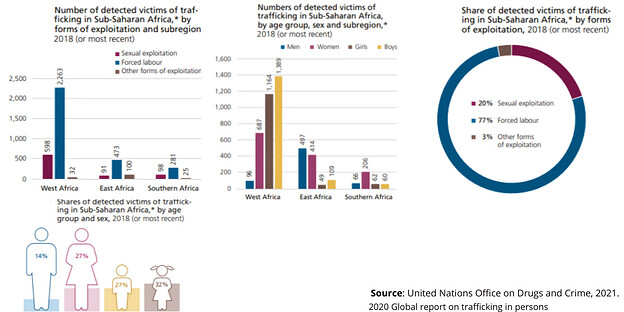 Human trafficking involves using threats, coercion, abduction, or fraud to transport, harbour or receive people. It also involves payment to have control over another person, for the purpose of exploitation (World Health Organization, 2012). Out of the 3 common types of human trafficking, forced labor or involuntary servitude is the biggest type of trafficking in the world (Human Rights Commision, n.d.).

Over 75% of trafficking victims in West Africa are children (United Nations Office on Drugs and Crime, 2021). These individuals are moved into other parts of the world such as Western Europe and the Middle East (Obokata et al., 2019), they are exploited in forced labour, commercial sex, begging and forced criminality (UNODC, 2019).

According to the 2020 global report on trafficking in persons, 50% of adults and minors who are trafficked are from low and middle income countries (United Nations, 2021). Also in 2018, 32% of trafficked victims in Sub-saharan Africa were girls (United Nations, 2021). Human trafficking is endemic in Africa, and it requires an integrated response to curb it (Obokata et al., 2019).

This year’s World Day Against Trafficking in Persons theme is: “The use and abuse of technology”. It focuses on how technology can either enable or impede human trafficking.

How can we use technology to prevent and report cases of human trafficking?

Wow, I had no idea that such a large percentage of trafficked victims were children.

I wonder if it is accurate to label human trafficking a “public health issue”. Doubtless it is an enormity, an atrocious violation of human rights. But is it a public health matter? Accuracy in classification is necessary so that we don’t confuse crimes with diseases.

Hello Dera,
Please I’ll be responding to your comment in parts.

Your sentence "I wonder if it is accurate to label human trafficking a “public health issue”. and “Accuracy in classification is necessary so that we don’t confuse crimes with diseases.”

Public health is a vast field that doesn’t only focus on diseases. It involves:

Your sentence "Doubtless it is an enormity, an atrocious violation of human rights. But is it a public health matter? "

Indeed human trafficking is a crime. But going by the case-effect relationship in public health, the implications of increased level of forced labour, commercial sex, forced, begging and forced criminality can include:
forced marriages, teenage pregnancies, rape, domestic abuse, incidence of sexually transmitted diseases such as HIV,etc. These are identified global public health issues that are effects of human trafficking (the cause).
PS : These could also be the effect of other public health issues (think of it as a cascading effect).

A thought: Human trafficking is the vehicle and the effects are the passengers. As long as the vehicle exists and is moving, the passengers, and more passengers that are yet-to-be identified, sporadic or endemic in some populations will either come onboard, or alight from this vehicle.

Thank you for your reply. What you said is true. Human trafficking is trafficking in more than one sense: it may also spread diseases like HIV, and it promotes enormities such as rape, domestic abuse, teenage pregnancy, etc.

Still, I’m not convinced that human trafficking, as such, is a public health matter. It is primarily a crime, something to be handled by law enforcement agencies, not public health institutions. If everything that affects “a population’s health and wellbeing” was a public health concern, we would have to include illiteracy, unemployment, poverty, homelessness, armed robbery, terrorism, fraud, and so on. But this would make public health not the name of a specific field but a catch-all phrase for anything we don’t like.